Oh the weather outside is frightful

But the fire is so delightful 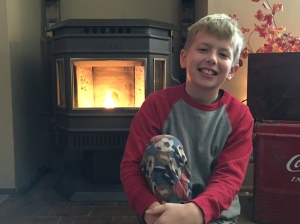 And since we’ve no place to go 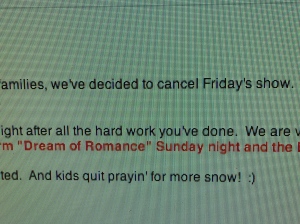 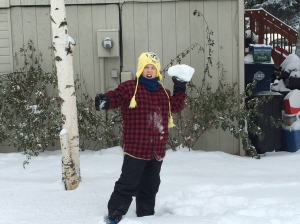 This song selection was just too tempting to pass up.  Listening to it is like a sort of time travel for me because it takes me right back to my childhood when I was a little girl sitting in a pew at Central Church of the Nazarene in Vancouver, WA.  Back in the day, the church would periodically have “request night” for Sunday evening service.  And usually some very smart person with very good taste would put in a request for my mom and dad to perform this song.  In my mind I can hear my mom’s beautiful singing voice and my dad’s deep and steady narration with the amazing accompaniment of Mrs. Ketchum on the piano.  I think she could play anything!  And I know I’m biased, but my parents are wonderful singers.  They have smooth and rich voices that make it easy to listen to them.  You see, it could be said that I grew up on Gaither music.  But even more accurately, it could be said that I grew up on my parents singing Gaither music.

I’m pretty sure this video is from a Gaither Homecoming video.  And no disrespect to Sandi Patty, but she doesn’t quite do it like Mom.  And no disrespect to Bill Gaither, but he doesn’t quite get the same effect as Dad (not that anyone could).  So enjoy this well-written song.  The chords start out simple, but then build up in a beautiful and dramatic way as the song progresses.  And the truth of this song is profound and lasting.  It’s good for me to remember that “God Gave the Song.”

Last week, I accompanied Brent to Texas for a pastor’s conference.  We spent the whole week in the Dallas area.  If you know anything about Dallas then you know that it has an extraordinary amount of shopping and restaurants (especially the restaurants).  No exaggeration, there are restaurants everywhere!  So when Brent was in meetings and coaching sessions, I had a lot opportunity to visit some of those restaurants.  I know, I know!  It’s a tough job, but somebody’s got to do it.  And last week, that someone was me!

The first evening was a big group gathering at The Rustic.  It has the biggest backyard of any restaurant in the downtown area.  We arrived early in the evening, but it was pretty late by the time we left.  It’s kind of funny that when you’re in a major city, you have to plan your outings based on how you want to avoid rush hour traffic.  There was a lot of yummy barbecue, a lot of music, and a big screen to watch the Monday Night Football game.  The culinary tour had a begun. 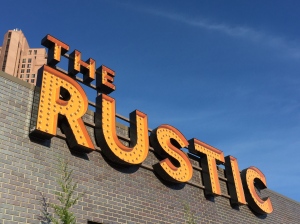 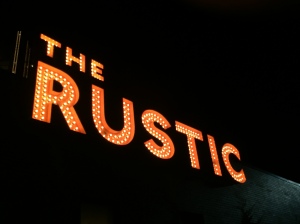 Another one-of-a-kind, first-time-ever place that I was able to visit with some of my new fellow-pastor’s-wife friends, was The Bin in Rockwall.  Caesar salad, a beef slider, and fries (half regular, half sweet potato) made a perfect lunch.  I love going to a restaurant that is a totally new experience for me.

On the other hand, I must admit that I was most excited about some “throwback” places that I haven’t been to in a very long time.  As some of you know, we lived in the Dallas area when we were first married.  We left there when Emma, who is now 13, was just one year old.  So, needless to say, it’s been awhile.  And when I had the chance to revisit some old favorites, I was definitely a happy camper!

One of those “once upon a time” places was la Madeleine.  It’s cute and cozy and Frenchy and they still have my favorite tomato-basil soup of all time.  Thank goodness there are some things that don’t change!  If I could get away with it, I could probably eat la Madeleine food every day of my life.  It just never gets old. 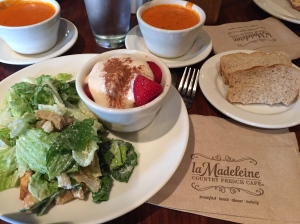 Another stop we made was a place that’s not fancy or expensive, but Brent loves their sandwiches and we can’t get it here at home.  So we made sure not to neglect the chance to have some Chick-fil-A.  And they didn’t disappoint!  How can you go wrong with a high quality chicken sandwich, waffle fries, and a drink that even comes with a bendy straw? 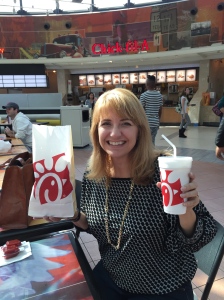 I think all those funny cows in the Chick-fil-A commercials would approve.

On the last night of Brent’s conference, it was time for another group gathering.  Everybody came to our host’s home for a night of fellowship and funny stories.  To feed everybody, they brought in a pizza oven food truck.  How cool and creative is that?  Good food and good people made for a great night.

The mobile restaurant set up in the street

Boards waiting to bring in some piping hot pizza

The fire in the oven, where all the magic happens

There were a lot of other places where we ate during the trip, but honestly, after awhile I just stopped taking pictures of them.  At the end of a whole week of eating out, I was starting to get restaurant weary.  Don’t get me wrong, I’m grateful for it all, but I just don’t think I could do it all day every day (unless it was la Madeleine, and then I think I could definitely do it!).